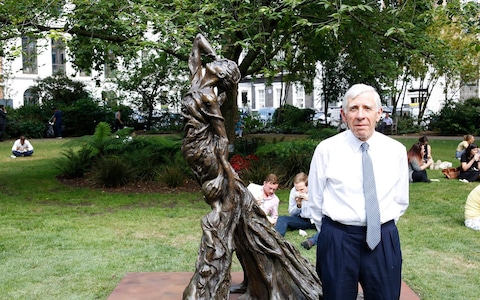 This week, a bronze sculpture commemorating victims of sexual violence in conflict was installed in St James’s Square in central London.

The Mother and Child sculpture by British artist Rebecca Hawkins depicts a mother and her child trapped by strangling vines but sheltered in a protective embrace.

It seeks to memorialise the strength and endurance of all victims of sexual violence in conflict: not just direct victims, but also children born of rape, who often battle with their roots.

I hope the installation of this sculpture will bring attention to the grave need for policy solutions that address the needs of victims within their communities.

As “International Ambassador” for Justice for Lai Dai Han, a group which gives a voice to the Vietnamese victims of sexual violence during the Vietnam War, I have heard first-hand accounts of the stigma victims face and the difficulties they have in accessing sorely needed support from local authorities.

From specialist psychological support for victims and their children, to local grassroots educational campaigns which tackle the drivers of prejudice, policies are required not only to end sexual violence but its lasting consequences as well.

The “Lai Dai Han,” which means mixed blood in Vietnamese, are the dual heritage children of Vietnamese women sexually assaulted by South Korean soldiers during the Vietnam War.

More than 800 are still alive, and many more of their children are still struggling for recognition today. To date the Government of South Korea has never recognised the allegations or investigated them.

I find this surprising, since the same government announced in 2018 its ambition to be “the mecca for the issue of wartime suppression of women’s’ rights” in the wake of its successful campaign to persuade the Government of Japan to acknowledge the plight of Korean “comfort women” raped by the occupying Japanese forces in the Second World War.

In their local communities, often remote rural areas in Vietnam, these dual heritage children – now adults – have suffered for what happened to their mothers.

Tran Dai Nhat, whose mother was raped by several South Korean soldiers, was bullied by both pupils and teachers throughout his childhood, leading to a struggle of identity and acceptance throughout his adult life.

Mr Nhat, who founded Justice for Lai Dai Han, is campaigning for an apology by the government of South Korea. In many conflict or post-conflict areas, the children of victims of rape face ostracisation by society for the “crime” of descending from an enemy combatant.

One only has to look at the Supreme Yazidi Spiritual Council in Iraq’s decision to accept survivors of rape by Isil combatants back into the community, but not to recognise their children, to understand that children are the “invisible victims” of this horrific practice.

While programmes such as the UK’s Preventing Sexual Violence in Conflict Initiative (PSVI) are doing essential work, much more needs to be undertaken by governments to persuade countries recovering from conflict to take action in support of victims.

In particular, we must fight the things that condemn children to a life of shame and ostracisation: gender inequality, inter-community conflict, prejudice and ignorance.

As the UN special advisor on the prevention of genocide said in a briefing to the UN Security Council in 2017, shame and stigma are integral to the logic of using sexual violence as a weapon of war.

In order to fight this widespread practice, we must work to change this reality. The UK Government should take a leading role in strengthening access to psychological support and health services for survivors, by awarding grants to support the operation of NGOs providing these essential services to victims in post-conflict areas.

It has been proven that stigma and bullying associated with sexual violence increase the likelihood that victims will either fail to report the crime or drop out of school or work.

The government should work with local governments in areas recovering from conflict to design and implement targeted community education programmes to counter the causes of prejudice and stigma against victims of sexual violence.

These programmes should focus on changing attitudes that cause people to blame the victim, and on affecting long-term change to factors fuelling sexual violence, such as the weak cultural and political position of women and girls in society.

The installation of the Mother and Child sculpture in central London marks the culmination of a drive to raise public awareness and draw global attention to this important issue.

Since the start of the year, the campaign has hosted two events in Westminster to bring together British Parliamentarians and campaigners for the prevention of sexual violence to discuss the steps needed to end sexual violence in conflict for good.

Despite the many challenges that victims still face, many will be heartened by the progress made recently to strengthen justice and increase accountability.

In fact, just last week, the 2018 Nobel Peace Prize winner Nadia Murad met with US President Trump at the White House to discuss her experience as a victim of sexual slavery whilst in Islamic State captivity.

However, in order to maintain momentum on this issue, governments such as ours should take a leading role in supporting, both through rhetoric and funding, educational campaigns that fight stigma in areas where conflict-related sexual violence is or has been prevalent, such as South Sudan, Iraq and Nigeria.

The UK’s PSVI conference, to be held in London this November, is an ideal platform to announce further commitments.